Saturday Morning at the Picture Books: On a Beam of Light 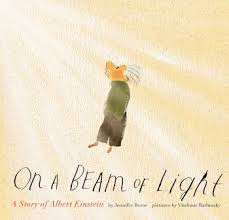 On a Beam of Light: A Story of Albert Einstein is a clever, witty, and informative tribute to a historic icon (with a twist of comic strip thrown in for good measure). The story clocks in at a "just right" length for the picture book crowd. It's never clumsy or slow. I found it captivating.

Of course, a conscience was at the core of Einstein's deeply wondrous wonderings. It's not new that his discoveries left a mark on the world. So did his philosophies and poetic offerings. Yet, in the end, Ms Berne circles us back around to a very personal meaning. Nice.

Readers will love the tonal illustrative technique used by Vladimir Radunsky, done here in goache, pen, and ink. Beautiful. The art is fresh and superbly alive.

On a Beam of Light is exquisite. I mean... just look at that!

That's my own quote. Repeat now with a NY accent. (Which I don't have, but do it anyway, just for the effect.) I always say that quote whenever someone compliments me on a dish, specifically Marinara. The recipe itself is nothing special. Wait. I didn't just say that. Did I? Because actually it IS special. Granted, it's lean on ingredients, but it is special nevertheless. It's special because the recipe comes from a spoken tradition of sharing recipes. Clove of this, pinch of that, handful of the other... sloshed aprons and messy counters!

Truth is, recipes that are passed down orally from generation to generation contain more than just directions on a yellowed slip of paper. Smoosh, smack, and throw are three unlikely action verbs you won't find in any cookbook. Those instructions are reserved for the days when the cook takes you into her/his kitchen (and heart) to show and tell a recipe.

So stop looking! You won't find which Italian aria to sing over the pot of spaghetti sauce in a cookbook. You won't find which old wooden sauce spoon to use either. And you won't find any footnotes about all the wrist slapping that occurs when an adult child slips into the kitchen to sample a hot spoonful of sauce...
"But Ma! It's the best eva!"

My Sicilian grandmother, Carmela Celi LaVigna, demonstrated most of her recipes. Okay, from time to time she would reluctantly write down a recipe, even though we would need a translator to read her handwriting - yeesh, at least we got it in writing. A-hum, my grandmother wrote how she spoke, in broken Italian.

That said my dears, be warned, for my version of Marinara is slightly different from the one my grandma melodiously made Sunday after Sunday. (It's true. I adapted it. Eeek!)

Over the years I have added a few subtle tricks learned from my Aunt Jinnie, my non-Italian mother (can she legally cook Italian that well?), my cousin Gary, plus my own tribulations.

If YOU were standing here, right now, in my kitchen, I would hug you all, and show and tell this recipe.  But you're not, so here's the next best thing... in broken English.

Turn up O mio babbino caro, don a stained apron, and get out that cranky old wooden spoon.

Begin by removing the peels from all the tomatoes - par boil for 1 minute in a big pot of boiling water.
While the tomatoes cool, place several glugs of olive oil into a medium large saucepan. (Be generous, you'll be glad you did!) Add one to two cloves of garlic, each cut in half.  Ever so gradually heat the oil. You do not want olive oil to smoke. If it does... you must start over. (Turns to trans fat.)

Next, peel the cool tomatoes and discard skins. Squeeze each tomato over the sink to remove many of the seeds and some watery innards. This will make you feel very Italian.

Now blend the peeled and smooshed tomatoes in a blender until smooth. Add this to the warm garlic oil. Crank up the temp to medium. Stir in one jar of organic tomato paste. (Not Muir Glen.)  Fill the jar with water, and add to sauce. Stir (with that old wooden spoon.) Toss in some dried or very finely chopped fresh basil. And a heavy pinch of sea salt.  (Be generous, this isn't the time to cut back on sodium. Plus Himalayan sea salt is healthier.)  Stir often. Do not cover your marinara for three hours!

I usually allow mine to simmer for four hours, total. Then it's time to ladle your Marinara over freshly boiled and drained pasta.

Posted by Carmela LaVigna Coyle at 3:18 PM No comments: