Yes, the house came down — a tiny blonde brick house reduced to a pile of twisted window frames and 70-year-old two by fours. Long ago, the house sat on what use to be a dairy farm. As did all the houses around here. But the lay of the land has changed since that last quart of cream. Now, all of our homes sit on the upside of a hill, with nary a cow in sight, aside from the concrete one in my backyard. 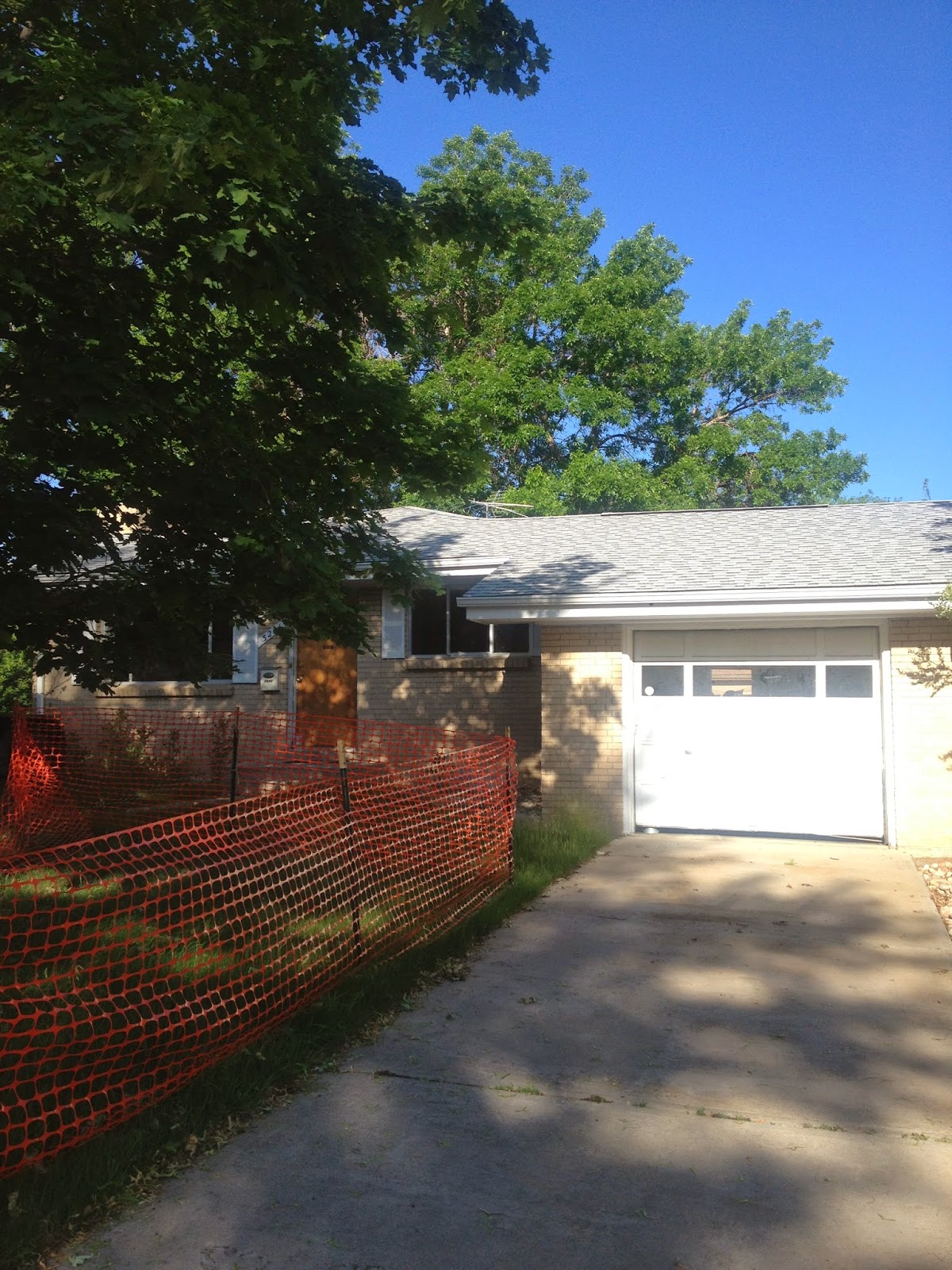 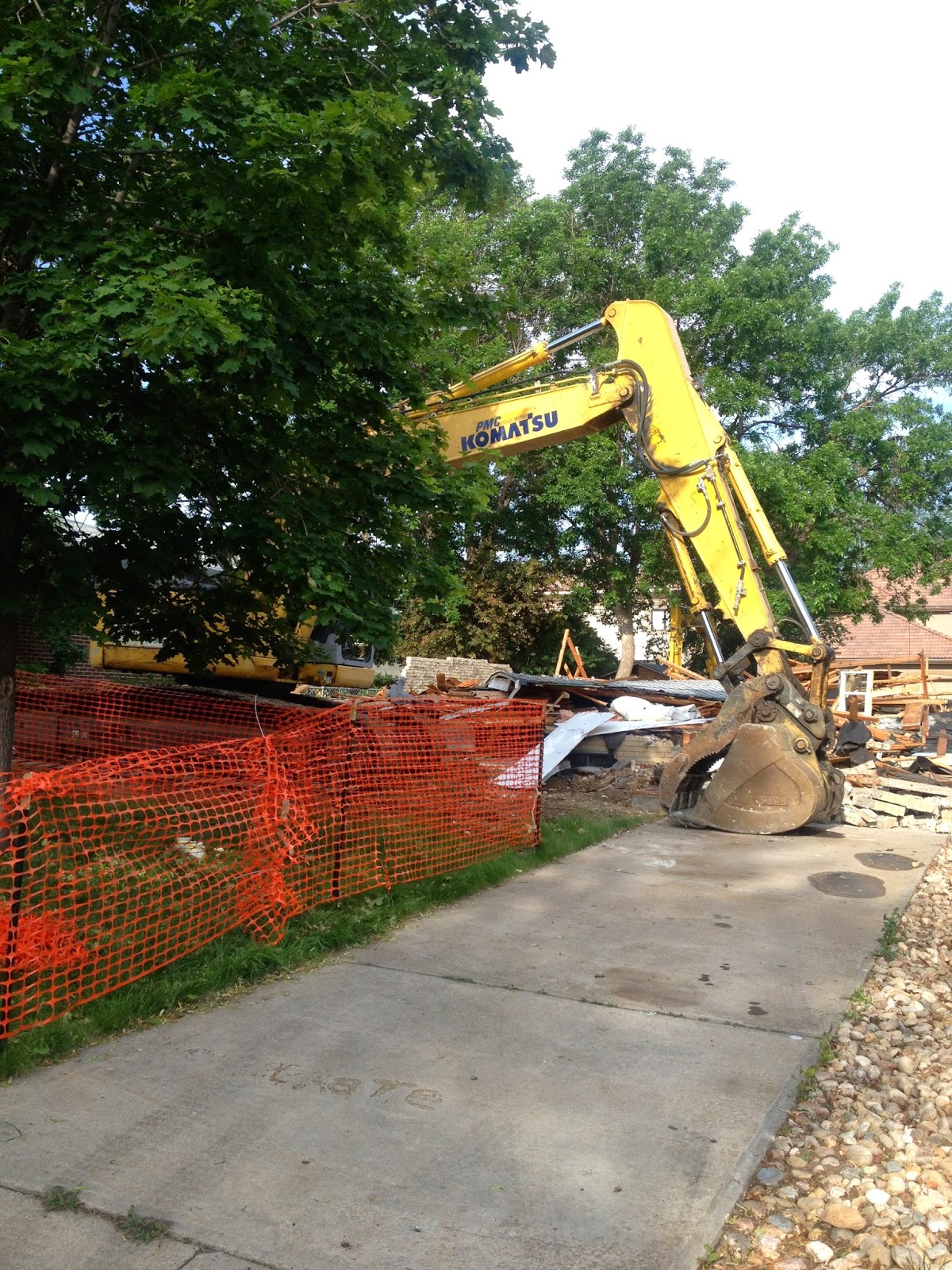 The backhoe has finished demolition — there are no real remnants of family life at their address on  Cherry Street, where Maria and Gregory once made their home.

They’re both gone now. Really gone. Maria and Gregory Barlowsky, our Ukranian neighbors. But it wasn’t THAT long ago when they were (t)here, cooking up a storm of borsch or potato pancakes, tending their “estate”, next door to us, speaking Russian or some hybrid dialect combining Russian and Ukrainian. Ever hear a heated argument in Russkrainian? We have. A few.

Maria and Gregory came to America from the Ukraine some years after surviving WW2 and a brutal concentration camp. They came (wounded) HERE to Colorado with two children, hope, trust, and a few pennies. Gregory came without a left arm, apparently the victim of bomb shrapnel. Maria came with an abhorrence for vinegar, apparently the Nazi concentration camp substituted vinegar for water.

Without a college education, they worked long grueling hours saving their money in hopes of buying the American dream. In the 1970’s, they purchased a humble brick home at 4th and Fillmore and lived quietly for five years. But Gregory was offered a “much-ah betta” job as a deliveryman for a pharmacy in South Denver. So, they sold their Fillmore home and moved southward.

Our little family didn’t arrive next door until the late 1990’s. I recall the two of them standing at the front door, hours before Two Men and a Truck had even pulled away, Maria in a babushka, Gregory gesturing “welcome!” with an arm that wasn’t there. They introduced themselves with a bag of cucumbers, tomatoes, and beets. Every day for the next two weeks they brought homegrown vegetables to our doorstep, hanging them on a doorknob if we weren’t home.

Gregory never allowed his disability to deter homeownership. He enthusiastically mowed, clipped, trimmed, wheelbarreled and gardened. And Maria did everything Gregory did, plus all the cooking and cleaning. She always said they made a good team, but I secretly thought she was the real super hero of the family.

Maria told of an angry young man with a bandaged body during 1940’s Europe. She was intrigued the moment she saw him at the camp. Anger and resentment dripped off of this man, she said, who's buttons were never buttoned correctly. One day she watched from afar as he struggled, one-handed, to button his shirt, expletives flying. Little did Gregory know a sixteen-year-old angel was approaching. Maria took hold of his lapel and began buttoning each one into place. She smiled, then walked away without saying a word. After that, she said Gregory was a changed man with all his buttons in a row. It seemed her small kindness squeegeed and swabbed up all his disappointment and rage, replacing them with compassion.

The two were together ever since then.

Today though, it is as if no particle of their beings was ever there. The structure, the house, their home, is no more. My mind has to squint to remember how it all laid out. It’s even hard pressed to find leftovers of Gregory’s buzz cut lawn beneath the rubble. But it’s there, I think, somewhere, for a few more hours, before the backhoe scrapes it clean.

Maria and Gregory Barlowsky lived an abundant life on Cherry Street. Of course their grown children remember. Their children will always remember!  But, next door . . . I'll be remembering too.

Posted by Carmela LaVigna Coyle at 11:22 AM No comments: